The Keymmodore project is an interfase to convert keyboards and joysticks of Commodore computers in a USB device able to be connected to any Operative System with USB HID (Human Interfase Device) compatibility, like: PC (Windows/Linux), Raspberry Pi, Mac,  and even Android. This way, the Keyboard works like any other keyboard and the joysticks inputs are translated to key strokes too.

Besides being fully functional in any normal working enviroment or any Operative System, Keymmodore supports VIC-20, C-64, C-16 and Plus/4 real Keyboards. It can emulate C-64, VIC-20, C-16, Plus/4, C-128 and PET Graphics and PET Bussines keyboards (using emulators like VICE). You have eight keyboards in one!!!!

Kemmodore allows you to use a real Commodore keyboard despite using emulation instead of the real hardware. The layouts for computers with Numeric KeyPad like PET and C128 are very intuitive, you to acces any key or function from the original keyboard, even keys non existent in you physical keyboard.

This can be ideal to be a companion for PC emulators like VICE, or Combian and Bare Metal Commodore for Raspberry Pi.

As a “spin-off” of the Keymmodore Project, I built Pimmodore. An «elegant» way to put a Raspberry Pi (and the USB interface) inside a Commodore computer case. This way you can have a complete computer able to run not only modern software, but also emulates your favorite old computers, including their joysticks.

For more information go to the Keymmodore-64 Users Manual. 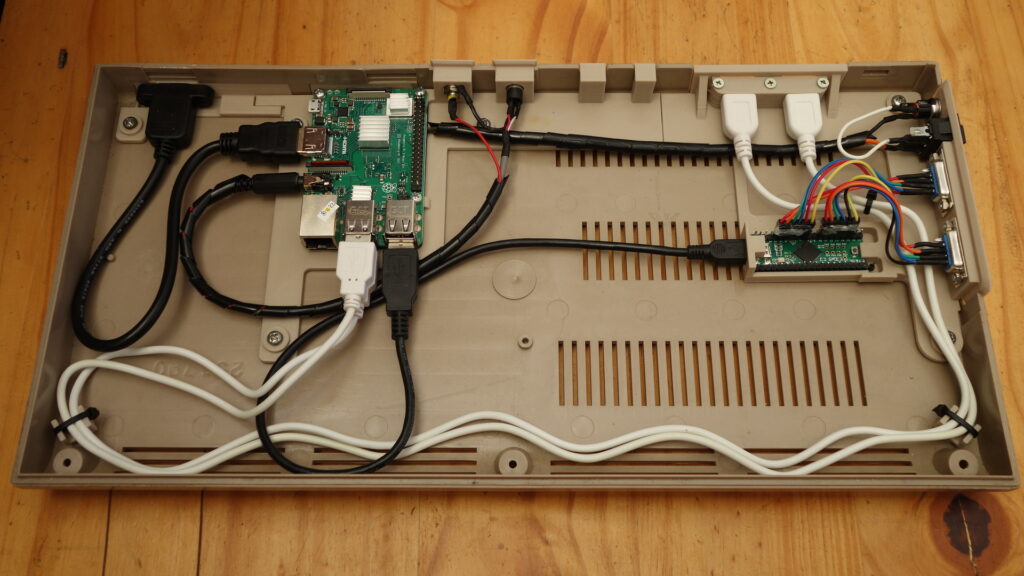