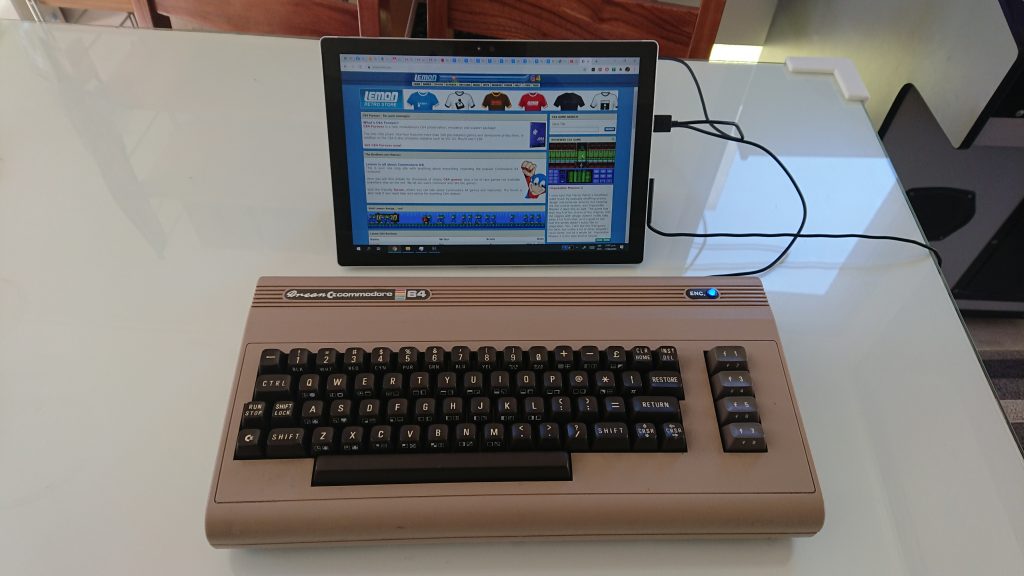 Initial note: For the Keymmodore-64 keyboard work properly, you should verify that the computer or host (Windows, Linux, Android, etc) has the Keyboard Layout set in «United States (US) » or «United States – International». It does not work correctly using «UK», «LA», «SP» or any other Keyboard Layout.

Keymmodore-64 has five working modes, also called «Compatibility Modes». Click over each Mode to go to the corresponding layout:

The PC Compatible is the default mode when you turn on the Keymmodore plugging it to a USB port. This mode is designed to be used with PC, Raspberry or even Android, or any other platform compatible with USB-HID (Human Interfase Device).

Due to it’s reduced number of keys relatively to a standard PC keyboard, the Keymmodore-64 acts like a so called «60%» keyboards, where there is no Function, Cursor or Numeric Pad Keys (although C-64 keyboard has some). Also like 60% keyboards, some keys act like «Special Function» Key (Fn), allowing access to a different layers having different function for the same keys. The Commodore Key (C=) is of course one of them.

The Commodore-64, VIC-20, 16, 116 and Plus/4 Compatible Mode allows perfect emulation ot those computers, having every key mapped to it’s corresponding C-64 Key. For C-264 series computers some keys have changed position to make it more productive.

The Commodore-128 Mode, has the same layout than the C-128 including the Numeric KeyPad and the exclusive first row keys like «40/80 Col» (accessed via a Fn key).

The Commodore PET Graphics Compatible is designed for PET 2000, 3000 and 4000 series emulators, including the graphics PETSCII set.

The Commodore PET Business Compatible is designed for PET 3000-B, 4000-B and 8000 series emulators, including Capital and Lowercase letters.

Important: This Compatibility Modes (except PC) are designed to be used with VICE or VICE based emulators like Combian or Bare Metal Commodore. You have to download the .vkm files, set the Keyboard Layout in Positional (User) (instead of Symbolic) and use these files as users mappings.

How to switch modes (and how the RGB LED works).

By default, the keyboard is mapped as a regular Compatible PC Keyboard, indicated by a green LED as explained below. You can always go back to this mode from any other Mode, just pressing C= and CTRL keys.

The detailed info about each Compatible Mode can be found by clicking in the corresponding LED.

Commodore-128 Mode: Press C= and F3. The LED will turn blue and keep blue, except for Right Shift and C= Key).

Commodore PET Graphics Mode: Press C= and F5. The LED will turn yellow and keep yellow except for C= Key.

Pressing C= Key (a Fn key actually) during this Mode, the LED turns white allowing access to PETSCII labeled in the front-left side of the keys.

Commodore PET Business Mode: Once in PET Graphics Mode, you need to press C= and F5 again. The LED will turn purple and keep purple, except for C= Key.

Pressing C= Key (a Fn key actually) during this Mode, the LED will turn white allowing access to NumPad Keys.